Finasteride has demonstrated in the last 20 years of use that it is clearly an effective product with regards to its application in androgenetic alopecia. The discovery of finasteride marked a new era in the treatment of this condition and has worked to change the lives of millions of men who have chosen to use it. However, the very mechanism of action that makes it a successful treatment option and contributed to its popularity is also what sparks concern about the possible effects of Finasteride on human fertility. Finasteride is in a category of drugs that affects the male hormone, testosterone. If you take a closer look at how it works, you will find that it acts on a molecular level; stopping the enzyme type II 5α-reductase from converting testosterone to it’s more potent form: dihydrotestosterone. These two hormones are androgens and are chemical messengers in the body that contribute to masculinisation. It is understood that androgens do have a key role in the production of sperm in men but what is less understood is how altering the ratio of dihydrotestosterone to testosterone affects this process.

The success of Finasteride in the last two decades would have meant that many men who would have been taking Finasteride would also have been at the age at which fertility would have been an issue. It is reasonable to expect that in the last five years, this figure would have increased significantly. Even so, in the initial clinical testing conducted prior to the release of Finasteride, men who had expressed that they were planning to father a child were initially excluded. In addition, the studies conducted on animals did not come up with any evidence of negative effects on fertility. However, after the release of finasteride, there were spontaneous reports of infertility and poor seminal quality sparking concerns that finasteride could have an effect on male fertility.

An early study published in 1999 looked at the effects of chronic use of finasteride and the production of semen. It considered 181 men between the ages of 19 to 41 over a period of 48 weeks and also what happens in the subsequent 60 weeks when finasteride was discontinued.
They found that there were no significant effects of finasteride use at a dose of 1mg on sperm concentration, total sperm per ejaculate, sperm motility or morphology and concluded that treatment with a 1mg dose of finasteride over the 48 week period did not affect the process of
spermatogenesis or semen production in these men. They did find that that use of the higher 5 mg dose did reduce ejaculate volume by about 25%. It should be noted that the 5 mg dose is not used in the treatment of androgenetic alopecia but is reserved for treatment of enlarged prostates. The recommended dose for androgenetic alopecia is 1 mg and increasing the dose has not been found to make it more effective.

A later study displayed a different set of results because it looked at a sample of men not from the general population but specifically from a male infertility speciality clinic. This study ran over 4 years and considered 4400 men for inclusion. Out of these only 24 were included in the study. These men were taking low dose finasteride for androgenic alopecia at a dose of 1mg. The patients ranged in age from 26-54 years and the mean duration of treatment was for 57 months. The results from this study were significantly different to the earlier study by Overstreet et al. The earlier study looked at fertile men but in this later study, the researchers were specifically looking at men who already had issues with fertility. The second study found that the chronic use of 1mg finasteride had a more profound effect on in men with some preexisting underlying issues with regards to fertility. It is as if finasteride amplifies the negative effect that finasteride has on fertility in this group of men. They found that when finasteride was discontinued, they saw a significant increase in sperm count and the effect was more noticeable in men with severe oligospermia (a low sperm count).

Although this study only looked at 24 men, it was found that the sperm counts improved dramatically (an average 11.6 fold increase) when finasteride was discontinued. The results were found to be statistically significant and none of the men experienced a decrease in sperm count
after finasteride was stopped. There are other individual case studies that also support findings of increased sperm counts and volume after cessation of finasteride for men who were having issues with their fertility. The researchers involved in this study also suggest that the higher 5 mg dose (not used in the treatment of androgenetic alopecia) was more likely to adversely impact sperm function in men with normal fertility and not in men who were using the 1mg dose.

There does appear to be variability in response to finasteride. Some men simply seem to be more sensitive to these effects than others. Another study found that most men experienced minimal changes in sperm parameters whilst on finasteride therapy. However, in a small proportion of men (approximately 5%), showed a profound sensitivity with a resulting decrease in total sperm count to less than 10% of their baseline values. There seems to be some consensus within these studies that it is men with pre-existing subfertility issues that seem to be more adversely affected. 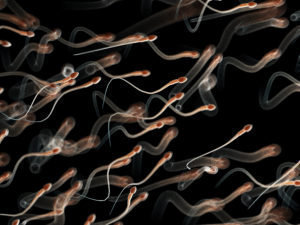 Men who are born with a genetic deficiency of 5 alpha-reductase also show variation in their ability to produce sperm. These are men who have a low level of dihydrotestosterone on account of their inherited deficiency of the enzyme alpha reductase. It is sometimes useful to consider this population of men when thinking about what would happen when levels of dihydrotestosterone are lowered through the use of finasteride. If altering the levels of dihydrotestosterone alone were to be responsible for affecting sperm production, then it should follow that these men with the inherited condition should all suffer from low sperm counts. However, it was found that some have normal sperm concentrations and others seem to have very low sperm counts.

So will finasteride make you infertile? Probably not but it does appear to have a negative effect on fertility in some men. It is recognised that in some men, in particular men who are already having issues with infertility, finasteride seems to compound the problem. In particular, men who have pre-existing conditions with infertility and low sperm counts seem more likely to experience adverse effects on their fertility from finasteride. If you are having issues with your fertility, it would be reasonable to seek medical advice to ascertain if taking finasteride is affecting you.