Levitra is one of the treatments for erectile dysfunction available for sale here at Mens Pharmacy. To help our clients understand their medications and medical conditions, we’ve written a series of articles on our blog that will provide further information about different conditions and medications.

Levitra is the brand name for a medication known as Vardenafil Hydrochloride. It belongs to the pharmacotherapeutic group known as Urologicals.
Each film−coated tablet of Levitra contains 5mg, 10mg or 20mg Vardenafil.
Levitra is available as round orange tablets marked with the BAYER-cross on one side and “5, 10 or 20” on the other side.

The other substances (excipients) in each film coated Levitra tablet (that are inactive) include:

There is 7.96 mg sorbitol (E420), and 1.80 mg aspartame (E951) per orodispersible tablet.
Orodispersible Levitra tablets are available as white round tablets.

The legal category for Levitra (Vardenafil) is POM. This means that this medication is a prescription only medicine and it can only be supplied or sold according to the instructions in a prescription issued by a duly qualified and registered doctor or non-medical prescriber.
You should not buy this or any other prescription-only medication without first speaking to a duly qualified and registered healthcare professional like a doctor or non-medical prescriber.

What is Levitra used for?

Levitra (Vardenafil) is indicated for the treatment of erectile dysfunction in adult men aged 18 years and older.
Please note that for Levitra to be effective, sexual stimulation is required.

What is the mechanism of action Levitra?

How effective is Levitra? 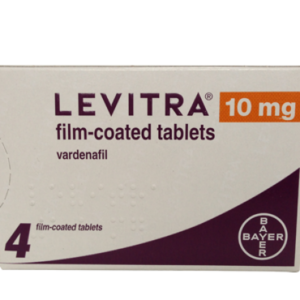 Is there anything else I need to know about Levitra?

Levitra 10 mg orodispersible tablet is not bioequivalent to Levitra 10 mg film-coated.
A physical examination may be required to diagnose your erectile dysfunction and determine potential underlying causes before pharmacological treatment is considered.
Grapefruit or grapefruit juice should be avoided whilst taking Levitra (Vardenafil). This is because taking both at the same time could lead to an increase in the blood plasma concentration of Levitra (Vardenafil). This increase in blood plasma concentration of Levitra (Vardenafil) could potentially increase the risk and severity of side effects.
If you develop any visual defects suddenly, you should stop taking Levitra (Vardenafil) and consult a doctor immediately.
As no studies have been carried out on the effects of Levitra on the ability to drive and use machines have been performed, patients are advised to be aware of how they react to Levitra (Vardenafil) before driving or operating any machinery due to the reports of dizziness and abnormal vision in clinical trials.

***
If you would like more information about Levitra (Vardenafil), please click here to fill out our contact form. Alternatively, you can call us on ‍0161 707 6800
Should you need urgent medical assistance, please dial 999.
If you would like to speak with our in-house doctor about getting Levitra (Vardenafil), please click here to start your remote consultation. Make sure you provide as much detail as you can about your health and any medications you take.