Premature ejaculation (PE) also known as rapid ejaculation, early ejaculation or rapid climax is a common male sexual disorder. PE in simple terms is a male sexual dysfunction characterized by ‘ejaculation which always or nearly always occurs prior to or within about one minute of vaginal penetration, the inability to delay ejaculation on all or nearly all vaginal penetrations, and the presence of negative personal consequences, such as distress, bother, frustration and/or the avoidance of sexual intimacy’. In this blog, we shall get to discuss the effectiveness of Priligy (Dapoxetine) in the management of PE.

Many of us would have come across a common medical term referred to intravaginal ejaculation latency time or IELT. IELT is the time between the start of vaginal penetration and the moment of intravaginal ejaculation. It is important to note here that IELT varies among individuals and again within the same person from time to time and in general decreases with age. Many therapists who work on sexual medicine suggest that the average time for heterosexual intercourse is about ‘7’ minutes and that 1-2 minutes is too short, ‘3-7’ minutes is adequate, 7-13 minutes is desirable, while 13 – 30 minutes is considered too long. Here again, ejaculation can be considered premature when it occurs 30 seconds to 4 minutes into sex, depending on different cultures and ethnicities. However, it seems that most tend to agree that any sexual intercourse lasting less than 2 minutes can be considered premature ejaculation. The problem here is that men tend to climax earlier while women take a longer time to orgasm. Between couples, it is always a question of having better sex, a better orgasm or a better relationship and premature ejaculation if present and untreated can result in both personal and interpersonal negative psychological consequences in an individual.

Many different drugs belonging to a particular class of antidepressants known as the selective serotonin reuptake inhibitors (SSRI’s) have been tried ‘off-label’ (not a primary indication) to treat premature ejaculation more specifically due to their ability to delay ejaculation in men. Examples include; Paroxetine, Fluoxetine, Sertraline and Citalopram to name a few. The SSRI’s listed here have proven to be beneficial in the management of PE, with Paroxetine exerting the strongest ejaculation delay. However these drugs have not been approved for the treatment of PE, primarily because of the need for daily dosing (need to be taken almost every day to attain a good therapeutic response) long time for onset of action (takes a couple of weeks to work) and the numerous side effects associated with them as they tend to be retained in the body for a prolonged period of time.

Priligy (Dapoxetine) – on demand use 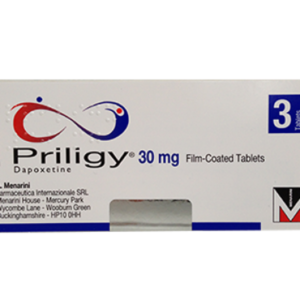 Dapoxetine (Priligy) is the first drug in the class of SSRI’s approved for the treatment of premature ejaculation. Priligy is said to be rapid-acting, can be used “on demand” and has a short half-life which minimizes the adverse effects that are common to the SSRI’s. Dapoxetine (Priligy) is rapidly absorbed and eliminated resulting in minimal accumulation in the body. This profile suggests that Priligy is the drug of choice for on-demand treatment of PE. Data suggest that Priligy (dapoxetine) administered 1-2 hours prior to planned intercourse, is effective and well tolerated, superior to placebo (no drug) and increases IELT 2-3 fold in a dose-dependent fashion.
Data also suggest that ‘no’ major drug-drug interactions were associated with dapoxetine (Priligy) and Co-administration of (Priligy) dapoxetine with ethanol did not produce significant changes in its efficacy. Drug interaction studies also demonstrate that phosphodiesterase-5 (PDE5) inhibitor such as Tadalafil (Cialis) used in the treatment of erectile dysfunction (ED), did not affect the pharmacokinetics of dapoxetine which makes sense in that people using PDE5 inhibitors to manage erectile dysfunction (ED) could if needed co-administer Priligy to treat premature ejaculation. Here again, food does not have a clinically significant effect on dapoxetine

Numerous clinical trials have been carried out on Dapoxetine (Priligy). To summarize, one such study suggests that in men with a mean IELT ≤ 2 minutes, dapoxetine 30 mg or 60 mg was more effective than placebo and the IELT increased from 0.9 minutes to 2.78 and 3.32 minutes at the end of the study with dapoxetine 30 and 60 mg respectively. Patient rating of control-over-ejaculation was fair, good or very good.
Dapoxetine 30 mg and 60 mg has been evaluated in several industry-sponsored studies in men aged at least 18 years. The outcome of treatment was measured using stopwatch measured IELT and premature ejaculation profile. It was concluded that the mean IELT and premature ejaculation profile improved significantly with both doses of dapoxetine in comparison to placebo.
Analyses of pooled data from several other studies indicate that dapoxetine 30 and 60 mg increased IELT and control over ejaculation, improved ejaculation-related distress, interpersonal distress, and sexual satisfaction compared with placebo. The efficacy of Dapoxetine (Priligy) was similar across the individual trials, indicating that dapoxetine is consistently more efficacious than placebo regardless of a subject’s demographic characteristics. In all these studies dapoxetine 30 and 60 mg were well tolerated with a low incidence of severe adverse effects.
One observational study to evaluate the efficacy and safety of flexible-dose ‘on-demand’ dapoxetine (Priligy) concluded that dapoxetine administered 1 to 3 hours before planned sexual intercourse at a starting dose of 30 mg could be increased to 60 mg if the response was insufficient and that the side effects were acceptable.
All dapoxetine drug treatment reports and studies point to an improvement in control over ejaculation, a decrease in distress related to ejaculation, satisfaction with sexual intercourse and an improvement in an interpersonal relationship (couple).

The recommended starting dose for all patients is 30 mg, taken as needed approximately 1 to 3 hours prior to sexual activity. Treatment with Priligy should not be initiated with the 60 mg dose. Priligy is not intended for continuous daily use. Priligy should be taken only when sexual activity is anticipated. Priligy must not be taken more frequently than once every 24 hours. If the individual response to 30 mg is insufficient and the patient has not experienced moderate or severe adverse reactions the dose may be increased to a maximum recommended dose of 60 mg taken as needed approximately 1 to 3 hours prior to sexual activity. The incidence and severity of adverse events are higher with the 60 mg dose. Here again, the efficacy and safety of Priligy have not been established in patients age 65 years and over.
Side effects
Dapoxetine (Priligy) was generally well tolerated in all clinical studies which used a flexible-dosing regimen (30 and 60 mg). The reported adverse effects were generally mild or moderate and dose-related and it has been suggested to decrease the dose from 60 to 30 mg in any person experiencing intolerable adverse effects. Some of the common side effects include; dizziness and lightheadedness, nervousness and confusion, excessive sweating, headache, diarrhoea, insomnia, decreased libido, blurred vision, ringing or buzzing in the ears, irregular heart rate, increase in blood pressure and dry mouth. Caution is advised in patients with mild or moderate renal (kidney) impairment and is not recommended for use in patients with severe renal impairment. Priligy as such is contraindicated in patients with moderate and severe hepatic impairment.
Conclusion
Several multiple evidence-based studies have demonstrated the efficacy and safety of dapoxetine (Priligy) in delaying ejaculation, providing satisfaction with intercourse, improving Personal distress and interpersonal difficulty, thereby confirming its role as the first-line agent for the treatment of lifelong and acquired PE.