The number of smokers among the population in the UK continues to fall whilst the prevalence of cigarette smokers who have quit continues to increase. In 2017, 59.5% of those who had smoked cigarettes regularly have quit. This leaves 15.1% of the UK population over the age of 18 smoking regularly, or 7.4 million; though, 60.8% of these wanted to quit. Nowadays everyone and their mothers know about the dangers of smoking – It’s nearly impossible to miss it, especially if you’re a current smoker as there’s a warning reminding you every time you buy a packet of cigarettes or tobacco. That’s why this article is going to focus particularly on one danger of smoking, erectile dysfunction, rather than the entire list. With this in mind, try and name one single good reason to smoke and I bet you can’t. When I say good reason, I don’t mean something along the lines of “it helps me calm down when I’m stressed”; there’s plenty of stress relievers out there that doesn’t damage your body the way smoking does, try yoga or something.

But smoking is addictive, and it’s difficult to quit. As we said earlier, more than 60% of smokers want to quit and haven’t right now, so let’s break down some of the effects of smoking and some tips on quitting. But first, let’s run through those stats.

Erections are caused by sexual stimulation causing your brain to send signals to the nerves in your penis. This causes the arteries in your penis to relax, allowing your penis to fill up with blood causing an erection. Erectile dysfunction is the medical term for the inability to get, or maintain an erection, or hold an erection for long enough to achieve satisfactory intercourse. Since smoking damages blood vessels in your body it causes the arteries to narrow and makes it more difficult for blood to fill to the penis. On top of this, nicotine directly affects the blood vessels which carry blood to the penis which reduces the amount of blood flow to the penis.

Cigarettes contain up to around 41,000 chemicals acetone, arsenic and carbon monoxide.

Now if this doesn’t shock you, or at the very least make you rethink your smoking habits then I don’t know what will.

A study from the Urology Research Center, Tehran University of Medical Sciences, found that for smokers suffering from erectile dysfunction the severity of ED correlated significantly with the level of exposure to smoking. 118 patients who stopped (ex-smokers) and 163 who continued smoking (current smokers) were monitored during the study and after 1 year the ED status improved in 25% of ex-smokers but in none of the current smokers, and ED deteriorated in 6.8% of current smokers.

Stopping cigarette smoking can improve ED and so many more aspects of your health & life in no simpler terms.

But as with so many things in life, smoking is a hard habit to kick. That’s why we’ve compiled a list of methods proven to help 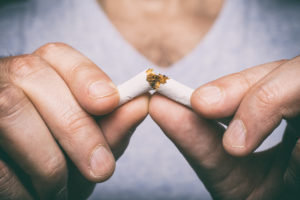 We’ve acknowledged that quitting smoking is hard. Incredibly hard. So for this list, we’re only going to include the best, scientifically proven methods to help you quit. The NHS has compiled a list to help start you on your way here, such as making non-smoking friends and writing a list of reasons why you want to quit. A study in the New England Journal of Medicine showed that one of the most successful quit-smoking programs involved monetary incentives so we’re going to skip that as not many of us here will be offered that luxury. Going cold turkey is likely the way that most people will attempt, at least at first, but studies show that only 4 – 7% of those who attempt this actually succeed in quitting and cutting down your cigarette intake gradually is even more difficult.

Prescriptions drugs such as Varenicline (Champix) targets the nicotine receptors in your brain meaning that you won’t find the same pleasure from smoking. Obviously, if you’re not getting the same please from smoking, you’re a lot less likely to continue. Studies have shown that taking Varenicline can more than double your chances of quitting compared to using no drugs at all.

Nicotine addiction is the main reason why people continue to smoke, so being able to absorb the nicotine without the intake of the rest of the poisonous chemicals are going to significantly improve your health along with your chances of quitting.  Nicotine replacements come in different forms such as

The jury’s still out on this one as e-cigs haven’t been around long enough for enough data to have been gathered on the long-term effects of using one. In 2014 a study was found that e-cigarettes help 7.3% of participants quit smoking over the course of six months, compared to 5.8% of those relying on a nicotine patch. Another study has found that while e-cigarettes have helped people quit, it hasn’t necessarily helped them quit for good, so it may not be the answer for everyone but we found it worth including due to their popularity and ease of use.

The NHS is a great resource in the UK when it comes to helping to quit smoking. If you’d like to look further into the treatments and help available via the NHS click the link below

As if you needed any more reasons to quit smoking, let us remind you of a few

This is a big one on our list, especially with how common it is

We could write an entire article on every single health benefit you’ll receive when you quit smoking, but for now, we’ll keep it condensed under ‘health’. You’re more likely to live longer, less likely to develop certain cancers, you’ll feel more fit in general and be able to breathe easier

Smoking ages you, and this becomes more apparent the older you get. Want to avoid wrinkles? Give up the tobacco!

If you have a family, of course, you want to set a good example and be there to witness all the wonderful things that come along with it. But if you have children, the longer you smoke, the more likely your children will too.

More money in your pocket